The death of al-Baghdadi, the Caliph of ISIS requires a Bible Prophecy Update. Is this event another piece in the biblical puzzle - or just a dead end? Do the names of the Islamic State have biblical significance? Does the name Daesh link to Dan 7:7? Were there ties between Turkey and the Islamic State? Is that why Baghdadi was hiding so close to their border and why Trump warned them. What is the great prophetic significance of al-Baghdadi's death?
Posted by Doc at 9:02 PM No comments:

"Love Yourself First" Is A Lie - TheFuelProject

The Early Church Thrived Amid Secularism and Shows How We Can, Too

Excerpt from the article:


As long as Christians assume we are still living in Christendom, the church will continue to decline in the West, no matter how ferociously Christians fight to maintain power and privilege. If anything, the harder Christians fight, the more precipitous the decline will be, for cultural power and privilege will come at an increasingly high price. Christians will either accommodate until the faith becomes almost unrecognizable, or they will isolate until their faith becomes virtually invisible.
Nothing short of a change of church culture will suffice—from a culture of entertainment, politics, personality, and program to a culture of discipleship. Such a radical change will require patience, steadiness, and purposefulness.
The good news is, we are not alone, and the story of early Christianity reminds us of this fact. Faithful Christians have gone before us, bearing witness to the truth of Christianity, the power of the gospel, and the high calling of discipleship. Calling out across the centuries, they tell us that it is possible now, as it was then, to live as faithful followers of Jesus the Lord in a culture that does not approve of it or reward it.
Two millennia ago, Jesus Christ—his incarnation, life, death, resurrection, and ascension—set in motion a movement that turned the world upside down. He is the same Lord today. It can happen again.
I highly recommend this relatively short article, you can read it in its entirety here: (LINK)
Posted by Doc at 6:18 PM No comments:

Is Bible Prophecy happening right now in the Middle East? When most see the recent actions of Iran and Turkey they think the Middle East is falling apart. But is it actually falling into line with what the Bible has predicted right from the start? Has the prophecy in Daniel 8 started to be fulfilled? What are the implications for the near future of the Middle East?
Posted by Doc at 7:01 PM No comments:

The Ruins of Sodom Discovered || They Prove the Bible Correct

Do the Ruins of Sodom reveal the Days of Lot and what they were like? Were they even more evil than expected? Do the Ruins prove the Biblical account is true? Watch and see actual remaining ruins of the cities of the plain!
Posted by Doc at 4:50 PM No comments:

Through the Bible Series - Chip Brogden

Over the last 20 years, I've been doing these chapter-by-chapter studies of the Bible.

This year I will have completed teaching the entire New Testament.

And I wanted to give these messages the widest possible distribution so we can reach more people with a Christ-centered message.

To do that, I put all these teachings (283 episodes and more than 323 hours of recordings) into a free podcast called "Thru the Bible with Chip Brogden."

The good news is that the podcast is now available worldwide on any devices via iTunes, iHeart Radio, Spotify, YouTube, Spreaker, Google Play, Castbox, Deezer, and Podcast Addict.

So you can SUBSCRIBE to the podcast at any of those places where you listen to podcasts.

https://chipbrogden.com/ttb
Posted by Doc at 3:09 PM No comments:

Joel comes back from his trip to Mount Sinai and shows proof of the Exodus story at Jebel Al-Lawz in Arabia.
Posted by Doc at 7:55 PM No comments:

What's The Difference Between Catholicism & Christianity?

How Catholicism and Christianity differ.
Posted by Doc at 2:43 PM No comments:

The Gifts of God Are NOT For SALE // Warning Against False Prophets!

We all know of those who are using the name of God to exploit others for financial gain. What does the Bible say about this? In this commentary, we explore this and a few other themes in our recent episode.
Posted by Doc at 1:24 PM No comments:

We live in a day of "easy-believism." According to the way today’s church operates, it is very easy to be saved. All we have to do is make a confession, or repeat a prayer, or make a decision, or respond to an altar call.
In stark contrast to the conditions which exist in our day, Jesus frankly tells us that few will be saved, and few will find Life. When we read what Jesus Himself has to say we have to come to the conclusion that some within Organized Religion are guilty of trying to make the narrow gate and the narrow path into the wide gate and the wide path. We have become excellent salespeople and know how to use our powers of persuasion. We have become good at arguing our viewpoints. We are skilled at manipulating the emotions of other people. Those who know how can lead many people to the Lord – at least, according to the outward appearance.

It behooves us to go back to what the Lord Himself says, and we believe we have found at least seven occurrences in the Scriptures (beyond the two cited above) which seem to indicate that the way to Life is anything but easy. By the time we are concluded with our examination, we will understand why Jesus says few are able to enter into the Kingdom. In the first place, the Kingdom is more profound than we have been taught. In the second place, the Way which leads us into the Kingdom is more narrow than we have been taught. By the grace of God let us ask the Lord enlighten us so that we will not go on deceiving or being deceived...

Virtue Signaling - My Two ¥en Worth

I saw the below photo and the commentary (which I took the liberty to edit) posted on Social media and just had a thought on which I’d like to comment:

There are far too many people today who like to don diaper pins, colored ribbons, gather in groups to carry signs and placards, or slap a bumper sticker on their cars to demonstrate for all who see how "woke" they are and how much they care about others. In addition to this, they are also very quick to shout down any and all others who don't immediately jump on their bandwagon. Key Point: These days there are too many people who like to "virtue-signal" a whole myriad of "issues" but very few of them, if any, actually do something about it! But, if they really gave a $#!+ (here's a hint, they don't) about these people they claim to care so much about, rather than beat their chests and wail about the injustice for all to see, maybe we'd all be better off, to include the person they claim to love and care so much for, if they simply and quietly did what they could in the here and now, no matter how small! (Matthew 6:1-3 & James 1:27) 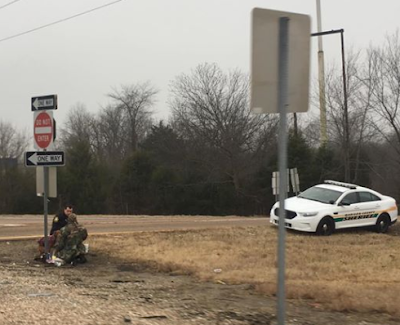 "Imagine this you are sitting on the side of the road and everything you own can fit in a backpack. It’s 42 degrees outside you’re lonely and hungry. You put your head down to try and forget the scream of hunger echoing in your mind. Then you hear the sound of an engine stop. You look up to see a uniformed officer walking towards you. Your mind flutters thinking of everything you might be doing wrong. Suddenly this officer sits down pulls out his lunch and not only takes away your hunger but your loneliness too."

In the story of the Bible, God is depicted as a generous host who provides for the needs of his guests. However, humans live from a mindset of scarcity and hoard God’s many gifts. In this video, we explore God’s plan for overcoming our selfishness by giving the ultimate gift of himself in the person of Jesus.
Posted by Doc at 3:11 PM No comments:

What is Mystery Babylon || Secrets of the Harlot Revealed - Nelson Walters

What is Mystery Babylon? What secrets of the harlot are revealed in this video? There is a logical and shocking reason that her identity has remained a secret. Is it’s great city New York, Rome, Mecca, Jerusalem or somewhere else? Why does the beast destroy mystery Babylon? Watch and see.
Posted by Doc at 6:43 PM No comments:

Keeping Unstained by the World - Frank Viola - The Insurgence

To listen to all episodes in this podcast, go to http://TheInsurgence.net.
Posted by Doc at 6:13 PM No comments:

The First Christians were given Power from the Holy Spirit! What were their abilities? How does the power of the Holy Spirit operate today? This episode explores how The Holy Spirit gave the followers of Christ incredible power and the ability to endure all things for the Gospel! Stay tuned and be inspired!
Posted by Doc at 2:45 PM No comments:

Paul wrote these letters to encourage the church and give sound advice for those that wanted to be better followers of the Way. When we apply his advice and guidelines in our lives, we become better stewards of the Kingdom of Elohim. Let’s continue reading and let the Holy Spirit convict us. Be Blessed!
Posted by Doc at 10:52 PM No comments:

Should Christians Celebrate Halloween? - THE BEAT by Allen Parr

Should Christians celebrate Halloween? This has been a popular question that I typically get around this time a year. What, if anything, does the Bible say about this and how should Christians conduct themselves during the Halloween season? In this video, I talk about 5 key things to be mindful of as you prepare for this time of year.
Posted by Doc at 5:24 PM No comments:

Revelation 12 Explained || The Woman, the Child, and the Dragon - Nelson Walters

The Woman, the child, and the dragon are explained in Rev 12 - the most controversial and mysterious chapter in the Bible. Are its symbols about zodiac constellations, the rapture, Israel, or the Church? Understanding these symbols requires a knowledge of the structure of the chapter and the source of the symbols. The chapter is not linear as modern readers expect but rather is a chiastic structure which is a mirrored structure where events happened then are repeated in reverse order. This causes the central event to be the most important in the chapter. That central event is the casting of Satan out of heaven. The source of the symbols is primarily the Old Testament and the Gospels.
The video thoroughly explains who the woman is and who the male child is, and whether this is a picture of a pretribulation rapture or a depiction of Jesus in the first century. It also unpacks the idea that the great signs in heaven may be zodiac constellations like Virgo.
The video then explains why the casting out of Satan may be the central event in all of Revelation and why it is given such an important place in this chapter.
Posted by Doc at 9:39 PM No comments: